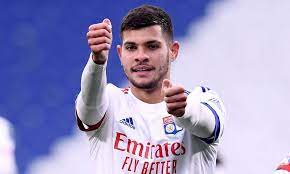 Arsenal have been given a boost in their reported pursuit of Bruno Guimaraes after the Lyon midfielder expressed his desire to play in the Premier League.

The 24-year-old has once again been linked with a move to the Emirates, with Everton and Newcastle also added as potential suitors.

Reports are suggesting that the Gunners are monitoring the Brazilian who has starred for Lyon in Ligue 1 and the Europa League this season.

Guimaraes did confirm an approach for his services from the Gunners over the summer, although the club did not make a formal bid for him at the time.

“Arsenal approached my agent, but there was no offer. My aim, and I made it clear to Juninho, is to win a title with Lyon.

“The fans have not had one for a long time. We have the Coupe de France, the Europa League and the league.

“It is difficult with the level that PSG are at, but anything can happen.”

Guimaraes then went on to say that he would not turn down the opportunity of playing in England:

“My aim is to win a title here, but I have never hidden my desire to play in the Premier League.”

Although Arsenal managed to sign Martin Odegaard from Real Madrid last summer, Arteta still believes he needs to bolster his midfield options, especially with Ainsley Maitland-Niles reportedly off to Roma and sees Guimaraes as someone who could add creativity to his side.

The Brazil international has five assists to his name and is averaging 1.4 chances created per-match, second to Odegaard at Arsenal, who boasts 1.9.

Guimaraes is currently happy at Lyon under manager Peter Bosz, but a move away from the French club does not seem far off.