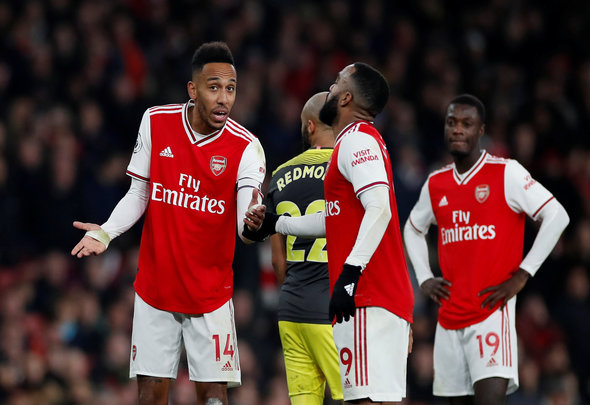 Pierre-Emerick Aubameyang and Alexandre Lacazette are both reportedly wanted by Barcelona.

Both strikers missed Arsenal’s opening fixture of the season against Brentford last Friday where the Gunners slumped to an embarrassing 2-0 defeat.

Aubameyang and Lacazette both still have two-and-a-half years left to run on their existing Emirates contract but it is believed Mikel Arteta is willing to let go of the pair.

And reports in Spain suggests Barcelona are interested in securing both their signatures this summer.

The La Liga club are looking to fill the huge void left by Lionel Messi, who signed for PSG this month.

However, Barcelona would not be able to pay Arsenal an upfront fee for the pair due to FFP rules placed on the Spanish club meaning that a player exchange deal would have to be be negotiated.

The report goes on to say that any deal for the Arsenal pair would also hinder on whether Barcelona could offload Martin Braithwaite.

Lacazette arrived at Arsenal from Lyon in 2017 and was joined by Aubameyang six months later after leaving Dortmund.

Between them they have scored 150 goals for the Gunners but have only managed to win one FA Cup title.

Aubameyang struggled last season at Arsenal, managing to only score 15 goals, while Lacazette, who has been in and out of the squad since Arteta’s appointment as manager, has been on the radar of several European clubs in recent months, including Atletico Madrid and Roma.