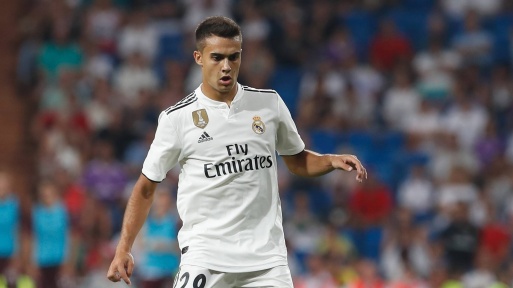 Arsenal are set to go head-to-head with Tottenham for the signing of Real Madrid defender Sergio Reguilon, according to reports in Spain.

The Gunners have been linked with several defenders ahead of this summer’s transfer window and Reguilon looks to be the latest to be added to the list.

Mikel Arteta will want to strengthen and improve his defensive ranks ahead of next season, but the Spaniard reckons any new signings will depend on the club’s final league position.

Reguilon, 23, is currently on loan at Sevilla but is viewed by Real Madrid as a bright prospect.

The left-back has made 25 appearances so far this season and has impressed with his overlapping play and pace down the flank.

And according to Spanish publication ABC Sevilla, Reguilon could become a wanted man this summer with up to 10 teams interested in him, including Arsenal, Tottenham, Paris Saint-Germain and Borussia Dortmund.

Arsenal are believed to be keen on the Real Madrid full-back due to Bukayo Saka’s contract situation at the Emirates.

The 18-year-old will have just one year left to run on his existing deal at Arsenal and has reportedly attracted interest from abroad.

The Real Madrid hierarchy will ask Zinedine Zidane his thoughts on Reguilon before deciding on whether to offload or not this summer.

Reguilon has recently suggested that he wants to extend his stay at Sevilla, but with interest mounting in the defender, Real will more than likely listen to offers from interested parties before making a decision.