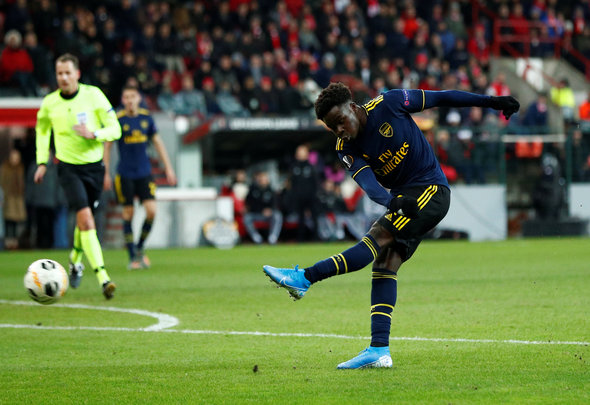 Thursday was another opportunity for young Arsenal wideman Bukayo Saka to impress, as he was handed a start in the Gunners’ 2-2 draw with Standard Liege.

However, it was a new position for the 18-year-old, with the winger being utilised in a wing-back role by Arsenal boss Freddie Ljungberg. To be fair to the teenager, though, he did very well.

Yes, he squandered a couple of decent chances in the first half, but the important thing is he was getting in the right positions and providing positive play.

And his positive play was very much rewarded in the second half as he score a terrific solo goal to draw Ljungberg’s team level. He did very well, grabbing the assist for Alexandre Lacazette’s goal and then grabbing his own.

The majority of the Gunners faithful were certainly impressed by the young man.

I’m extremely impressed by saka every time I see him

Smith-Rowe, Nelson, Saka and Willock are all phenomenal one-touch/two-touch players. Easy to tell that they came through our academy. Give them time and they’ll prove that they’re the future of our club.

These Arsenal supporters clearly liked what they saw from the young winger on Thursday. Playing out of position, he put in a very admirable effort against the Belgian side.

Yes, he made a couple of mistakes. However, this is a young man who is still very raw. He’s only going to get better as he plays more football, which is why this game was important for him.

You can live with Saka squandering the odd chance. What you cannot abide is him not getting in the right positions or being too tentative to shoot. Luckily, neither of those things occurred on Thursday.

Saka needs to fix up tbh. I know he's 18 but he's been poor for a while now, needs to do better

These youngsters seeking individual glory at the expense of the team is so infuriating. We should be easily 2-0 but for Smith-Rowe and Saka. #STLARS #EuropaLeague

Unfortunately there were still some Arsenal fans who were very quick to dismiss the youngster. The one claiming Saka is Crystal Palace and Newcastle United level is just ridiculous. Is that based just on this game? If so, what were they watching?

Yes, Saka perhaps was too selfish at one point and shot when he should have passed to a teammate but, again, it’s all a learning experience for him.

There’s simply no need to hammer him after what was actually a pretty strong performance.