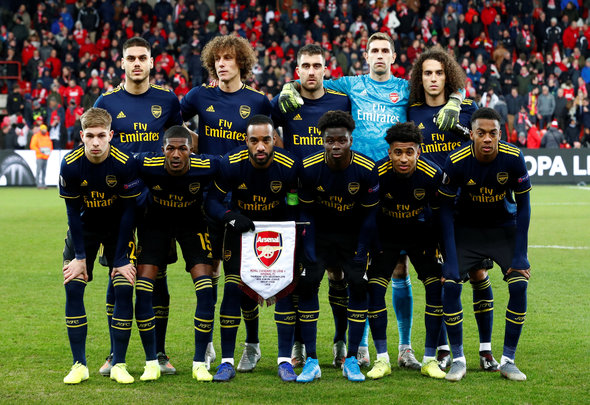 Arsenal centre back Sokratis provided yet more fuel for his numerous critics on Thursday night in the Gunners’ 2-2 draw with Standard Liege.

Freddie Ljungberg’s side never looked solid at the back – because some things never change – and Sokratis was a big reason for that in the Europa League tie.

The Greek international was partially at fault for Standard’s first goal, turning his back to Samuel Bastien’s strike and allowing it to take a big deflection off him and enter the Gunners’ net.

Yes, deflections aren’t entirely the player’s fault, but when you turn your back rather than confronting a strike, you’re asking for trouble.

Sokratis and Luiz is the worst partnership we’ve had for years.

Luiz & Sokratis simply doesn’t work. Not in the league, not in the Europa. Awful

Believe it or not, these Arsenal fans are being rather kinder than some of their counterparts. Of course they’re criticising Sokratis vociferously, but at least they aren’t calling for him to leave the club.

Still, they’re not exactly praising him either. You can’t blame them, though, because the 31-year-old has been completely below par ever since he joined the north London giants.

The fact that he has been allowed to continue to play regularly for a team as big as Arsenal for as long as he has simply isn’t acceptable. His Thursday display was more evidence that the club need a centre back signing massively in January.

So when are you going to sell #Sokratis @Arsenal ?!

Possible in 2 windows (Jan and Summer)?

As well as Sanllehi did in the transfer window this summer, can't help think he's a fraud based on the shambles pre and post Emery's sacking.

Then you have the Arsenal fans who are so fed up with Sokratis that they are calling for him to leave the club. They’re done with the dirge he has been offering in a red shirt – and offered once again on Thursday.

The problem is would anyone buy him? He’s past 30 and is in absolutely woeful form. Who’s going to want to give Arsenal money to take him off their hands?

But there’s no doubt that the Greek is certainly someone the Gunners need to be moving out if at all possible.