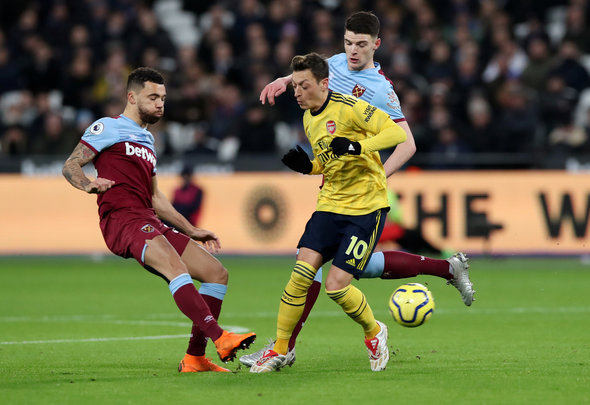 Another game, another disappointing performance from Arsenal playmaker Mesut Ozil. The German once again flattered to deceive in his team’s 3-1 win over West Ham United on Monday night.

It’s probably too late in some Gunners fans eyes for Ozil to redeem himself after years of sub-standard play and effort, but there are still a section who hold out hope that the 31-year-old will somehow return to his Real Madrid pomp.

On Monday’s evidence, it looks like that is a long way away at the moment. Indeed, the majority of Arsenal supporters were displeased by what he offered up against the Hammers.

There was a golden opportunity for him to get on the scoresheet towards the end of the first half, but he mistimed his header and made a mess of it.

Gunners Sphere has taken a look at the fan reaction below:

This Ozil guy should leave this club

Someone please tell ozil to leave I have had enough

Here are the Arsenal fans who are most dismayed by what the former Madrid man produced against Manuel Pellegrini’s side. They want him to leave the club, pure and simple.

The supporters simply won’t stand for his lack of effort and work-rate anymore, that much is clear. They’ve been saying it for a while now, but Monday had the feel of the final straw for the Gunners faithful.

However, there were some good old fashioned Arsenal fans who merely wanted to lay into the playmaker for this specific performance, which they didn’t feel was good enough.

We badly badly need a centre back and an attacking midfielder in January somehow.

You watch players like Maddison and Grealish and then you watch Ozil. Worlds apart now.

Watching Ozil sums up Arsenal. Never thought I’d say that but he is everything that’s wrong with the club currently.

This is the general consensus from the Arsenal fans. The comparison between Ozil and James Maddison and Jack Grealish is particularly apt. The German probably has more natural ability than either of them, but he is worlds away from them in terms of performances at the moment.

The one supporter claiming the playmaker sums up what is wrong with the club couldn’t be more right. He is more style than substance, all fur coat and no knickers. He’s a disgrace.