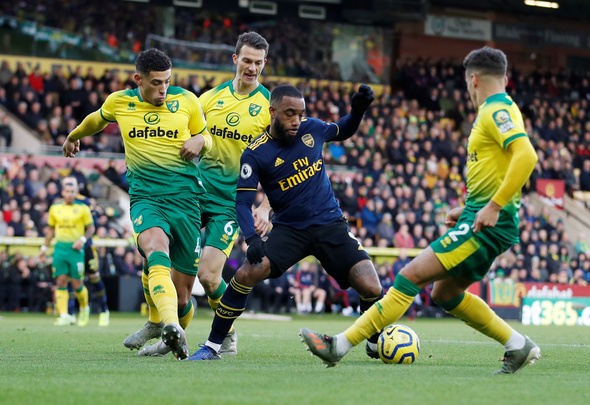 A section of Arsenal fans have taken to Twitter to tear into Alexandre Lacazette for his first-half performance against Norwich at Carrow Road on Sunday.

Lacazette, 28, squandered a good chance to put the Gunners ahead in the opening minutes but was not able to make the most of it when Joe Willock’s mis-hit shot fell to him.

The ball bounced harmlessly off the France international’s shin and went behind for a goal kick when he should have really grabbed his fifth Premier League goal of the season.

After that, a lot of Arsenal fans on Twitter were less than sympathetic towards the former Lyon striker.

It would have been an extremely bold decision if he did as the Frenchman scored both goals in the 2-2 draw against Southampton last week and the Gunners lost while he was an unused substitute against Frankfurt on Thursday.

Ljungberg could not drop Lacazette based on that but his miss in the opening few minutes was awful and you can understand the frustration that was shown by fans on Twitter.

Aubameyang and Lacazette as average as usual, they are not Arsenal quality. Pepe and Martinelli are what we need.

Lacazette making the simple things look hard under the 3rd manager at Arsenal, just sell him ffs such a fraud

Laca wants a move in Jan for CL but can’t convert those chances ? Big man check yourself pls

Laca stinks so much ffs.

What does Ljungberg do with Lacazette?

Pierre-Emerick Aubameyang is Arsenal’s best striker but Lacazette being in the side does mean that the Gabonese ace is forced to play in more of a wide position, which means he loses effectiveness in front of goal.

Arsenal have some really good attacking players who are really off the boil at the moment – but playing them out of position does not help.

Aubameyang was on fire earlier this season, scoring seven goals in seven games but in his last six games, he’s scored just once.

It is becoming more and more apparent that Aubameyang does not play as well when Lacazette is in the side and maybe Ljungberg does need to make the bold decision to drop the Frenchman.