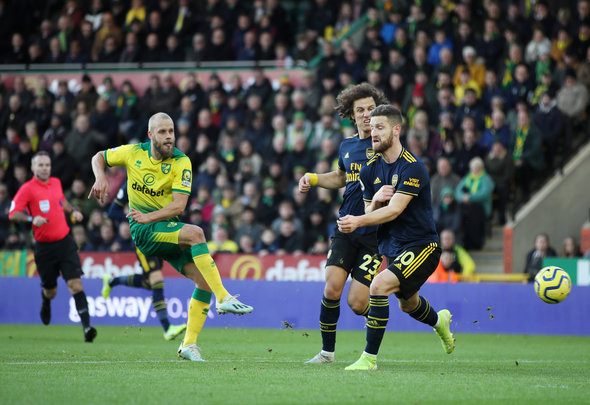 A substantial number of Arsenal supporters have, as ever, torn into Gunners centre back Shkodran Mustafi for his performance against Norwich City on Sunday.

It was a surprise when interim head coach Freddie Ljungberg threw the German international in for his first Premier League start of the season.

And he delivered a performance that most Arsenal fans expected, including being partly at fault for Teemu Pukki’s strike in the 2-2 draw at Carrow Road.

Mustafi left his centre half partner David Luiz all on his own in a 2-on-1 situation, and got back in time only to deflect the Finn’s effort into the back of the Gunners’ net.

As you can see below, the fans certainly weren’t happy with him.

Who’s Mustafi pointing at? Instead of pointing why don’t you close down properly instead of turning your back. Idiot

Shocked Freddie starts Mustafi. By now it is CLEAR – Mustafi and Xhaka are consistent liabilities. #AFC

This seems to be the general sentiment from the Arsenal fans regarding the former Valencia man. The Luiz-Mustafi partnership looked a dodgy one from the moment it arrived on Ljungberg’s first team sheet, and so it proved. Indeed, some Arsenal supporters even want the 27-year-old sold.

Xhaka, Luiz and Mustafi have got to go ASAP. Terrible players. #NORARS #Arsenal

Will Arsenal ever sell Mustafi – and who would take him?

This is the big question. The fact that Mustafi has managed to survive so long in north London already is a remarkable feat of providence. However, it begs the question of whether he’ll ever leave the Gunners.

There surely wouldn’t be a long line of takers were he to be made available in January, say. Surely no team in the Premier League would want to bring him in.

Arsenal’s best bet may be to loan him out in a deal with a purchase option at the end of it. Perhaps a Spanish club, where he enjoyed success previously, may take him. Someone like Sevilla or Villarreal.

Or a switch to an AC Milan or a Bayer Leverkusen. That’s probably where he’ll end up if he leaves Arsenal – and he should thank his lucky stars if he joins a team like one of those. Will any of them actually want him, though? That looks unlikely on Sunday’s evidence.