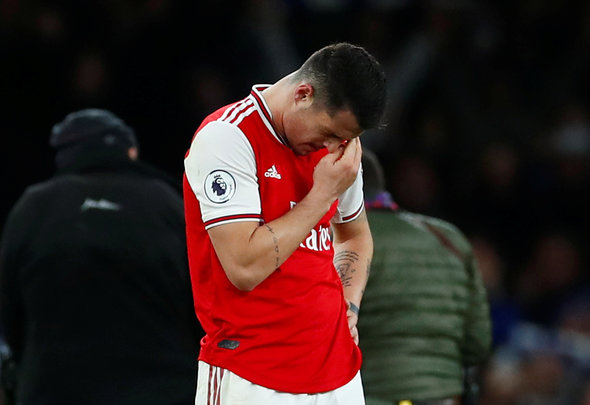 The two midfield enforcers put in limp displays as Freddie Ljungberg’s side fell to a hugely disappointing 2-1 defeat at home to Brighton & Hove Albion.

Dixon wasn’t impressed: “I wouldn’t for one minute think that the players are not giving 100%, as in their effort,” he said on Amazon Prime. “I don’t think players every go out and and go ‘I’m not going to try today’.

“Its a football intelligence problem, its not a trying problem for me. It’s not about effort, it’s about knowledge. It’s also about Torreira, standing, being in the right position. Xhaka, understanding we’re a man short, I’ll just sit in front because Torreira’s up the pitch. That’s knowledge, that’s not not trying.”

"It's not the first time he's been involved in something that's not ideal"@LeeDixon2 on Mesut Ozil's very public post-match anger…#PLonPrime #ARSBHA pic.twitter.com/DtK8hKK5bu

Is Dixon right to target these two?

Well, there are a whole host of Arsenal players you could justifiably criticise for what was a limp effort against the Seagulls. This team should not be losing at home to Brighton, under any circumstances, and so there are many Gunners you could blame.

Xhaka and Torreira probably weren’t as bad as David Luiz and Sokratis at the back, but they didn’t give the defence enough protection. As Dixon says, basic positioning seems to be beyond these two.

The former made two tackles, an interception and two clearances, while Torreira managed two, three and one in those categories respectively [Source: WhoScored.com]. Those numbers make it look as if they made big contributions, though, when in fact they were hugely lacklustre.

It’s a wonder that Xhaka is even still playing for the club after his outburst at the fans. Simply put, the north London giants are in an absolute mess at the moment.