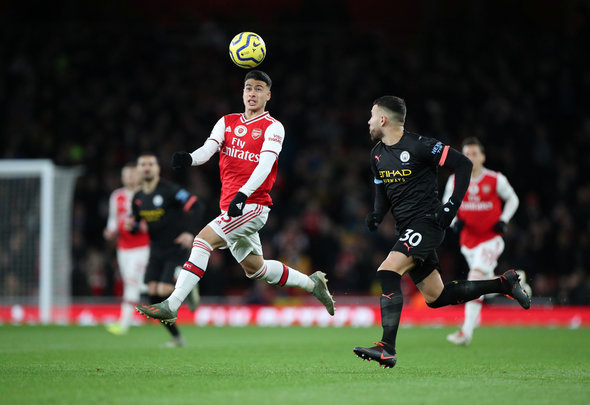 There certainly weren’t too many Arsenal players who emerged from Sunday’s 3-0 mauling by Manchester City with any credit whatsoever.

However, the exception to the rule, if there was one, was Gunners attacker Gabriel Martinelli. The Brazilian youngster did his utmost to try and lift Freddie Ljungberg’s side out of their slump.

Yes, he missed a chance right at the start of the game prior to City going up the other end and scoring through Kevin De Bruyne, but he was pretty much the only Arsenal player trying at the Emirates Stadium.

It’s clear that the Gunners fans appreciated that, even if it says very little about the performances of his woeful teammates. The 18-year-old bizarrely looks like a boy amongst men in this team.

Here are some examples of the Arsenal supporters appreciating Martinelli’s efforts.

If we had a team full of Martinelli’s and Torerria’s, we would be somewhere close to the top of the league. ? #ARSMCI

Its a shame our defenders are deciding not to turn up today, but Martinelli and Pepe are killing it #ARSMCI #COYG #ARSENAL

How is Martinelli our best attacker, midfielder and defender?

Martinelli is my guy man. Love that kid

Martinelli definitely has shades of peak Alexis in him. Very exciting prospect!

This is pretty much a consistent theme from the Arsenal fans. They think that Martinelli was their only bright light against Man City, lamenting that they don’t have a team full of players like him.

The comment that he has shades of peak Alexis Sanchez against him is an interesting one. The Chile’s star has certainly waned since his heyday in north London but, the fact that Martinelli is being compared – at just 18 years of age – with the Arsenal era Sanchez, says a lot about how promising the teenager is.

He was certainly trying his best, and it’s just a shame that the same couldn’t be said for all of his teammates.

we fall apart without xhaka? shock
martinelli, Pepe, Leno, all deserve more
Ozil is done
Please please please @Arsenal sign a brute dm like sanagre and another cb asap man this is so frustrating

These Arsenal supporters feel that the club, in its current iteration, simply don’t deserve a hugely promising young player like Martinelli. Someone who gives it their all is now considered a rarity at the Emirates.

It’s sad that it’s come to the point where Gunners fans are saying things like that, but that’s where we are with the north London giants at the moment.