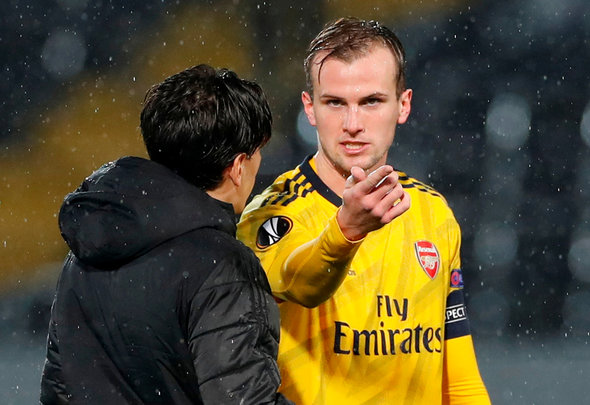 We’re not breaking any news by saying that Arsenal have a fair few defensive issues. That’s been long established in the latter Arsene Wenger years, and it’s continued under current boss Unai Emery.

Those defensive frailties were hammered home once again on Saturday in the Gunners’ wretched 2-2 draw with relegation fodder Southampton at the Emirates Stadium.

Emery once again went with a back five featuring a three-man central defensive unit. However, despite Arsenal’s numbers at the back, they were still carved open on numerous occasions by one of the worst teams in the Premier League.

It would be no surprise, then, if the Gunners faithful were waiting impatiently for centre half Rob Holding to get back to full and consistent fitness and hopefully save this beleaguered backline.

Certainly that’s the line of thinking after the horror show that two of the three Arsenal centre backs put in against the Saints. Calum Chambers and Sokratis were both absolutely awful on Saturday.

The statistics show that neither man did enough to stem the tide of attacks from the visitors. As per WhoScored.com, the Englishman made just one tackle and one clearance, recording zero interceptions and no blocks.

The Greek international, on the other hand, fared slightly better with two tackles, one interception, two clearances and a block. However, he had one unsuccessful touch and catastrophically gave the ball away inside his own penalty area at one point. If Cedric Soares had produced a better cross then Southampton would have scored.

Holding isn’t the sole answer to Arsenal’s defensive nightmares, far from it. But he is undoubtedly the best purely-defensive centre back at the club. Plus, at 24 years of age, he’s only going to improve the more he plays. Let’s all hope he’s back in Arsenal red soon.