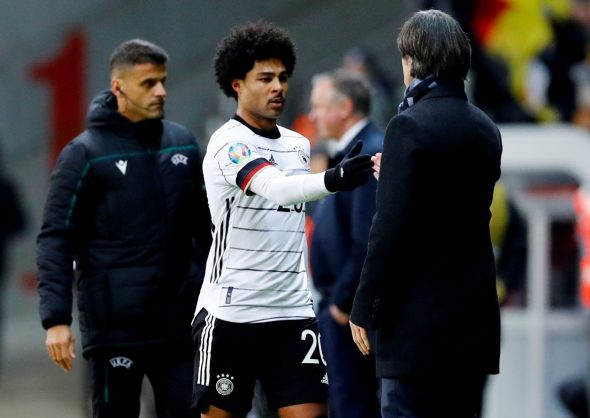 Northern Ireland manager Michael O’Neill has questioned how Arsenal didn’t manage to get the best out of Bayern Munich winger Serge Gnabry.

O’Neill heaped praise on the German international after he scored a hattrick in the Germans’ 6-1 demolition job of his Northern Irish side in the final European Championship qualifier.

Gnabry left Arsenal in 2016 to join Werder Bremen and went on to join German giants Bayern Munich after that just one year later in a £7.2million deal [Transfermarkt].

New Stoke City boss, O’Neill couldn’t believe that clubs like Arsenal couldn’t find success for the 24-year-old, who has since established himself as one of Germany’s main strikers.

“It’s a mystery to me how English clubs didn’t get more out of him,” he told the Sun.

The Bayern forward has earned 13 caps for the German national side under Joachim Low, and his recent hattrick took him to 13 goals in those appearances.

Gnabry has also been involved in 13 goals in 16 appearances in all competitions at club level, including a memorable night against Tottenham in the Champions League in which he managed to take home the match ball once again.

Arsenal will no doubt be kicking themselves over the premature sale of Gnabry more than three years ago. The 24-year-old has established himself as one of the most dangerous forwards in football, and not at the sort of prices we see so regularly nowadays.

His goal record at both club and national level speaks for itself, and a move in position to make him more central in the final third has paid off massively for the player himself.

It’s not just his goals where he impresses though, as he averages 3.5 shots on goal per game as well as 1.7 key passes according to WhoScored – stats that prove that although he isn’t as wide anymore, he can still create many chances as well as finish them off himself.

With Nicolas Pepe struggling during his first Premier League season despite the big money spent, Arsenal fans won’t be able to help but think about what they could have had with Gnabry instead and at such a cheaper price.