Unearthing a gem: Arsenal youngster has a bright future ahead of him 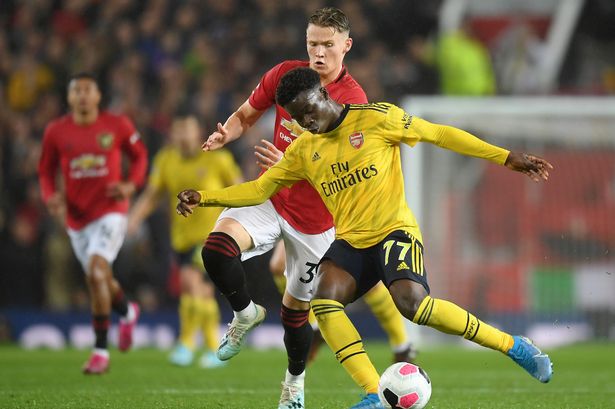 After an impressive performance in the Premier League during Arsenal’s 1-1 draw against Manchester United on Monday, Bukayo Saka has caught the eye of many Arsenal fans and his future looks to be in safe hands at the football club.

Saka, 18, illustrated the amount of talent that he possesses and showcased his ability on one of the biggest stages in world football, outshining £72m signing Nicholas Pepe. Not only did he hold his own in the hostile environment of Old Trafford, but he also played the killer pass that saw Pierre-Emerick Aubameyang run through and score to equalise for the visitors. The goal was initially ruled out for offside, but the decision was overturned by VAR which revealed that the Gabonese striker was played onside by Red Devils’ defender Harry Maguire.

Saka has already made four appearances for the Gunners this season and scored in the Europa League against Eintracht Frankfurt during their 3-0 win at the Commerzbank-Arena. He has illustrated that he has a lot of pace, can play key passes and score goals.

The next phase of his player development is to focus on his maturity. The former Gunners’ midfielder Cesc Fabregas recognised his ability and believes that his previous club have unearthed a gem. On multiple occasions, Saka got the better of the experienced Ashley Young down Arsenal’s left-hand side and caused the England international all sorts of problems.

He mustn’t be rushed into the team. Overcoming the language barrier and being able to communicate efficiently must be a priority for the youngster to take on instructions from the coaches. As Jamie Carragher discussed on Sky Sports, he can “sniff out danger” that showcases an intelligent footballer. Giving Saka the freedom to express himself in a system that works around him will help him become a future superstar.