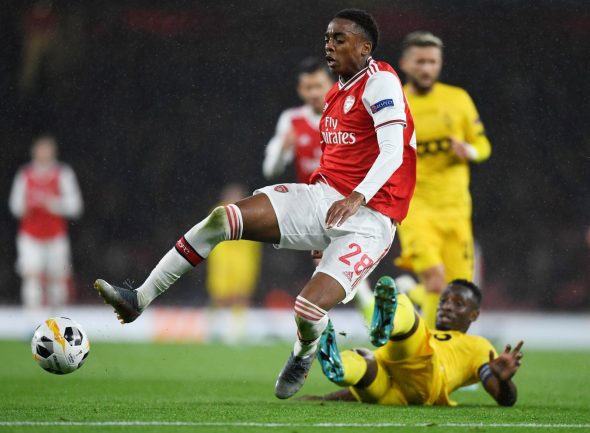 Arsenal fans were raving on Twitter about Joe Willock’s screamer in his side’s Carabao Cup penalty shootout defeat to Liverpool at Anfield.

The 20-year-old scored the fifth goal for the Gunners with a terrific effort from 30 yards out which left Liverpool keeper Caoimhín Kelleher unsuccessfully scrambling for the ball.

It was thought to be the winning goal, however Divock Origi’s 94th-minute equaliser spoiled the party as he made the game finish 5-5 on the night, with Arsenal eventually being dumped out of the competition after losing out 5-4 on penalties.

Fans on Twitter were clearly delighted at the young Englishman’s sensational strike.

What a terrific goal, totally deserved it, glad for Joe. Hope it helps him to get some confidence back ?

ONE OF THE BEST GOALS I’VE EVER SEEN!!!

He’s been quiet tonight, but that was a bit special.

Willock has repaid the faith in manager Unai Emery, who has given him a lot of chances to shine this season in which the young Englishman has not always delivered upon. This goal was special, considering former Gunner Alex Oxlade-Chamberlain had already scored a superb goal 12 minutes earlier. What’s important for Willock now is to push on from this, continue to find the back of the net and retain his place in a competitive Arsenal midfield.